Medicaid Expansion In The U.S. - Liens Filed On Beneficiaries Property 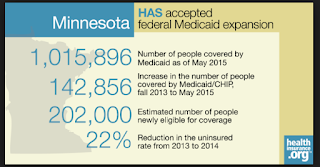 When the Affordable Care Act became law one of the requirements for states implementing their own insurance exchange was to expand their state Medicaid program. Medicaid expansion was one the biggest deterrents for many states creating an exchange. The funding coming from the Federal government to expand Medicaid is temporary. This leaves the state on the hook for the cost of the expansion.

Minnesota is a state that chose to expand Medicaid and now some of the beneficiaries of the expansion are learning what the Medicaid benefits are going to cost them. MNsure has been placing liens on beneficiaries property since 2013. MNsure is saying it really isn't them placing the liens it is the Federal government Department of Human Services.

MNsure CEO Allison O'Toole said the MNsure is working with the Department of Human Services to make the lien notice more prominent.

More can be read here